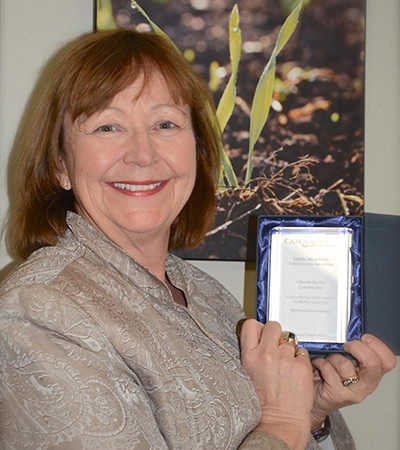 What a busy and exciting year we have had at “GoBarley.”

As you may have noticed, I was travelling across Canada all year as part of our push to get barley on the tables of all Canadians.

The annual Best of CAMA awards program celebrates excellence in Agri-Marketing in Canada and was held at the Château Frontenac in Quebec City on Nov. 21, 2013.

We received media coverage in every major region in Canada and made over 21,000,000 media impressions nationwide as we encouraged consumers everywhere to “GoBarley!”

This was the first full-scale promotion of food barley aimed at the Canadian consumer and the interest in Canada’s homegrown superfood was tremendous.

This media campaign was inspired by our health claim, approved by Health Canada in 2012, which concluded daily consumption of barley helps to reduce blood cholesterol, a risk factor for heart disease. We developed this “GoBarley” media campaign to promote our website www.gobarley.com and to showcase food barley like never before.

I want to thank the Best of CAMA awards, my family, Alberta Barley, Merkato Communications and, of course, everyone who tuned-in and made this all possible.

Our award winning “GoBarley” campaign will continue in 2014 with a national promotional tour for our new cookbook: Go Barley: Modern Recipes for an Ancient Grain.