The Barley Council of Canada’s (BCC) public relations coordinator Caitlan Carver was on site in South Korea at Seoul Food 2014 to spread the word about barley’s health benefits! Here is an inside look into what the show had to offer. Barley’s health benefits are helping people worldwide. As a barley ambassador on a mission to make barley’s benefits known, I travelled all the way from Canada to South Korea to speak directly with Korean buyers and consumers at Seoul Food 2014. The people of South Korea couldn’t be more excited about what the Canada–Korea Free Trade Agreement (CKFTA) will bring in the coming years. Korean importers and buyers gathered at Seoul Food 2014 in hopes of fostering new contracts and relationships with Canadian exporters. Seoul Food is a global initiative that focuses on expanding the world’s food industry. With 44 countries and 1,317 companies exhibiting, this event contributes to an overwhelming $4.16 billion worth of trade in food for South Korea per year. This year, global ambassadors arrived at the show with an unwavering message: the food industry depends on globalization. This belief resonates strongly with Koreans in particular, as their country has recently secured trade deals with the United States, Australia, Peru, Europe, Chile, Singapore, India, Indonesia, Turkey, Colombia and now Canada. South Korea’s celebrated reputation for global partnerships rings true through a common saying: “You can go fast alone, but you can go further with someone beside you—let us go further together.” This mantra resonated throughout the entire week of Seoul Food 2014. Buyers looked for new export markets and consumers were interested in seeking new and exciting products. I was surprised and excited by the popularity of barley. Although rice is a staple food in Seoul, barley is also consumed in large portions. Barley is largely mixed with rice for flavour, used as a powder in soups, and consumed in teas, water, cakes, crackers and bread. Koreans simply enjoy the taste of barley—its nutritious qualities come as a delightful bonus. Health trends are thriving in Korea and barley’s health benefits fit well with the ongoing movement. Although mass consumption of barley is alive and well in Korea, its popularity has dropped since the 1960s. Barley was a top grain in Korea 40 years ago because it was highly accessible and inexpensive to grow. But with a robust economy on the rise, consumption of barley has slowly declined in the past 15 years. However, barley is making a comeback in Korean restaurants and bakeries. This is because it’s been rebranded as a “luxury item” for the affluent population. Salads and packaged items that incorporate barley tend to be more expensive, as does barley-fed pork. Promotion of barley’s health aspects is similar to the quinoa grain, which has only recently become popular in Seoul. Korean consumers expect high quality for non-GMO food items and demand eco-friendly products. There is a large “organic mom” market that only purchases 100 per cent organic items for babies and children. Although Koreans remain health conscious like Canadians, they also love their barley sandwiches. To say Koreans enjoy malt beer would be an understatement—they consider it a fundamental part of any lunch or dinner. Canada currently exports 20,000 metric tonnes of malt per year into South Korea. Brewers attending Seoul Food 2014 were looking high and low for more quality malt. Koreans hold strong relationships in high regard—for Canadians to succeed in this market, it will be crucial to maintain consistent communication with buyers in Korea. Although tariffs through the CKFTA will not be eliminated right away for barley entering into South Korea, the next three years are an opportunity to grow relationships that will allow for long-term contracts once tariffs decline. Now is the time to open doors. Stay tuned next week for a full debriefing of my time in Seoul, South Korea. Anyeonghi gasyeo! (Until next time!) 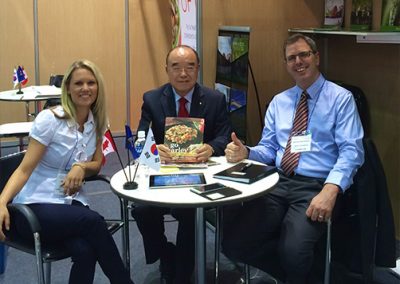 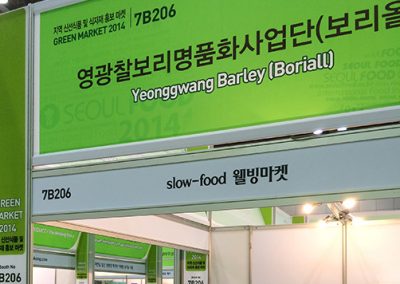 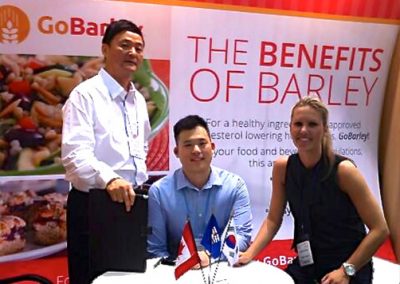 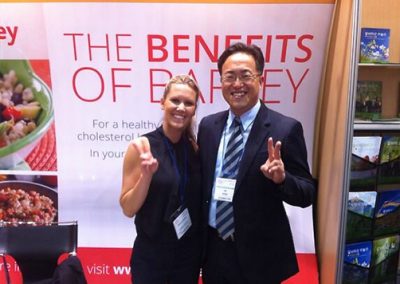 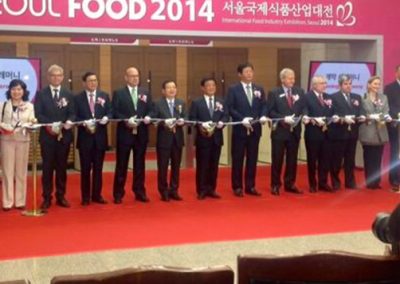