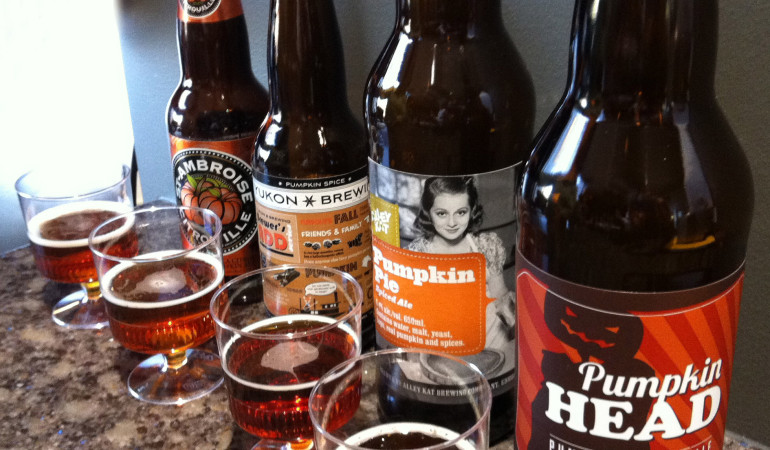 As sure as leaves turn and fall begins, pumpkin beers are brewed and drank by thirsty Canadians. It’s a seasonal brew that’s as spicy (and fleeting) as the season.

In celebration of this special beverage, six experienced beer tasters (including yours truly) took part in the inaugural Go Barley pumpkin beer tasting event. It’s a tough job, but we courageously accepted the challenge for the betterment of beer drinkers everywhere.

All the beers were made in Canada, with Canadian barley and/or wheat.

Here are our (not exactly scientific) findings:

Overall, the tasters said this clear, sweet and bitter beer had a pleasant pumpkin aroma. The taste was spicy, with hints of cinnamon.

Ultimate test: Five out of six said they would take this beer to their best friend’s party.

This amber ale came across as light, with a spicy aroma and salty flavour somewhat distant from the pumpkin on its label.

Ultimate test: Four out of six would not take it to their best friend’s party (and two of them refused to take another sip).

Despite great packaging and having cloves and cinnamon in the ingredients, the overall response to this brew was it did not have a spicy or pumpkin flavour. However, the tasters did find the beer pleasantly bitter and light.

Ultimate test: Six out of six would take it to their best friend’s party (even if it is ‘pumpkin’ in name only).

Hands-down, this dark concoction was our personal favourite. This dark, full-bodied ale won over the crowd with its bold, tangy flavour and hits of nutmeg and clove.
“It tastes like fall,” said one enthusiastic taste-tester.

Ultimate test: No one would take it to their best friend’s party because they didn’t want to share.