Cooking With Barley: A Q&A With Chef Quinn Staple 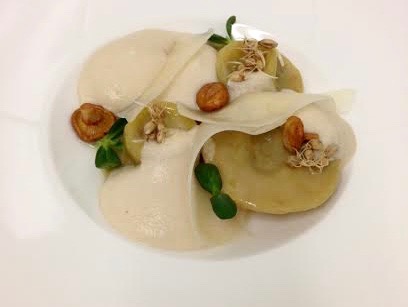 Beakerhead is an annual festival that happens every September in Calgary. It combines science, art and engineering in fun and expected ways. Just one of the events taking place during Beakerhead each year is Engineered Eats, a food event where local chefs use science to create new dishes. In 2017, the theme was barley and chefs were encouraged to use barley in all its forms to create a barley- focused recipe. That dish was then on the participating restaurants’ menus for the duration of Beakerhead.

Chef Quinn Staple, the chef de cuisine at Yellow Door Bistro in Hotel Arts, created a beef barley consommé ravioli with celeriac espuma and barley sprouts for Beakerhead 2017. The dish was so successful that the restaurant added a barley flour pasta, the beef cheek and parsnip ravioli, to its menu afterward. Here, Chef Quinn Staple discusses preparing the dish.

Q. Can you explain how you made your dish and where the idea to incorporate barley in these various creative ways came from?

At Yellow Door Bistro, we put an elevated twist on traditional dishes. We design bistro-inspired dishes that highlight our sense of place, incorporating local and seasonal ingredients whenever we can. Barley was a natural fit — we created a play on beef and barley soup.

Q. How did you make sure the barley flavours complemented the flavours of the dish overall?

We worked barley into a few different aspects of the dish to best showcase its flavour profile. We incorporated it into the pasta dough for the ravioli and the consummé had roasted barley steeped into it to extract those flavours. We also sprouted some barley to use for finishing on the dish. With such an emphasis on incorporating barely into the dish, we had to ensure we chose other ingredients that didn’t overpower. The richness of the beef acted as a focal point for the dish and the subtle, nutty flavour of the celeriac mirrored the same nutty undertones from the barely.

Q. What was the best part of experimenting with barley?

We’re always looking to play around with new ingredients. Barley is so versatile, we knew immediately we wanted to try and incorporate it into the dish in a variety of different ways to showcase that versatility.

Q. What kind of feedback did you get on this dish?

The dish was very well received. People loved the familiarity of the flavours you would find in a beef and barley soup, but done in a new and unique way which completely enhances the dining experience. We liked the application of the barley flour in the ravioli so much that we have a version of it on our current menu.

Q. What tips would you give other chefs working with barley?

The biggest challenge for us was the pasta dough. We anticipated that it would change the texture a bit and we just had to find the right balance.

Q. Why is barley an ingredient more chefs should consider adding to their menu?

First and foremost, it’s tasty and as you can see from our dish, it’s extremely versatile which allows you to get creative with it. We also love that it’s a Canadian product — we’re always trying to incorporate those and barley is such a great staple for any kitchen.